Opened in 1831 by Edward Cross, the Royal Surrey Gardens in Walworth hosted a huge number of grand events; from re-enactments of the eruption of Mount Vesuvius and The Great Fire of London, to spectacular fireworks displays and hot air balloon flights. The gardens housed a large music hall as well as one of London’s first zoos. 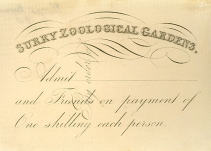 The Zoological Gardens included a large circular domed conservatory at its centre which housed a pond of exotic fish and birds as well as cages of large carnivores, including lions and tigers. Feeding time was a big affair and keepers were known to tease the hungry carnivores to ‘put on a good show’ for the visitors. Other exotic animals such as pigmy elephants and monkeys were kept at the zoo which rivalled the equally new London Zoo at Regent’s Park.

In 1843 five young giraffes were purchased for the Zoological Gardens. Bred from captive giraffes in Africa, they were bought at just 6 weeks old and were hand-reared. Their journey to Walworth took them across Africa travelling for 35 days to Cairo. At such a young age it was too far for the young giraffes to walk so they were strapped to the side of camels for transportation. From Cairo they travelled along the Nile by boat. Passage to Britain was booked on a ship from Alexandria, however, the young giraffes were growing taller and a 15ft high space had to be cut into the ship in order to transport them safely. Once arrived in London the animals were walked through the streets, from the docks to the zoo, under cover of darkness so that the sight of ‘strange horses’ didn’t scare the local residents. The giraffes, the first on public display in Britain, caused quite a stir – their “Nubian attendants” even more so, becoming celebrities in their own right. 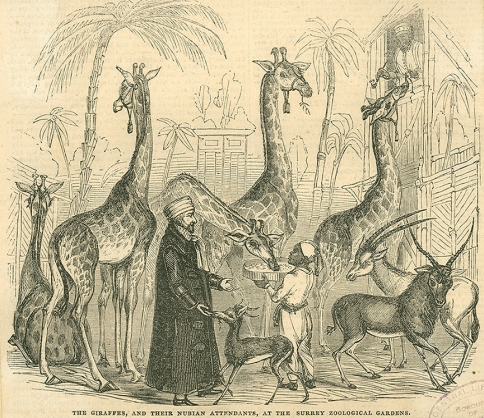 The Cuming family visited various events, fairs and fetes at the gardens and saved posters, tickets and souvenirs as part of their growing collections. The only surviving souvenir from Royal Surrey Zoological Gardens is a lovely plaster of Paris model of a one of the young giraffes, which stands around 38cm high. This was added to the collection by Henry Syer Cuming in the mid-1800s. 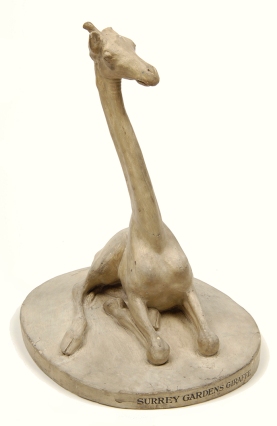 However, in 2013 a fire severely damaged the Walworth Town Hall which housed the Cuming Museum. The model giraffe was rescued but sadly had been broken into six pieces, all of which were dirty and discoloured from the smoke and fire, as well as being water damaged in the aftermath. Along with other damaged items the giraffe was sent to Plowden and Smith for restoration.

After numerous trials conservator Francis Toohey decided that the most suitable way to clean the fragile surface was with deionised water and white spirit, applied with a moist cotton bud and immediately dried. It was very slow and delicate work. 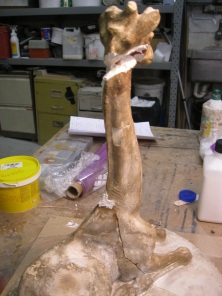 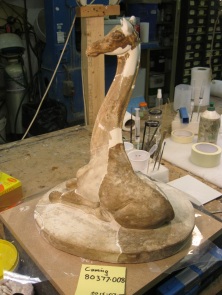 Once cleaned, work could begin on putting the giraffe back together piece by piece. PVA adhesive was used to bond the fragments together again and small holes or missing parts were made up with a soft acrylic filler and plaster of Paris tagged with Barium sulphate. As well as referring to photographs of the model before the fire conservators also researched giraffe anatomy, paying particular attention to the shape of the skull, to ensure the reconstruction would be accurate.

As different fragments of the giraffe suffered different fates during and after the fire – some badly scorched or soot damaged, others more seriously water damaged – it meant that although the structure was once again intact, the damage was still noticeable. It was decided that while any fills would be colour matched as closely as possible the patchwork colouring of the different fragments would remain, conserving the damage caused by the fire as part of the history of the object itself.

You can now view a 3D model of the reconstructed giraffe on Sketchfab.