By Emma Sweeney, Learning and Engagement Officer for Southwark Libraries and Heritage

For an institution so embedded in the fabric of our communities, so ingrained in the public consciousness, the free public library is a surprisingly recent innovation in this country.

The Public Libraries Act 1850, sometimes called the Ewart Act after its originator, William Ewart, allowed for local rates (taxes) to be increased by a halfpenny in the pound in order to pay for the provision of public libraries and museums—but the act had quite strict limitations. It only applied to boroughs with a population numbering over 10,000; the ratepayers of the parish had to vote, by a two-thirds majority, to adopt it; the money thus raised could only be spent on buildings and staff, not on stocking the libraries (for this they had to rely on public donations of books and money).

Further legislation was passed in 1855 and 1866 and the public library movement gained momentum, though not so much in London. The first public library in London established in accordance with this legislation opened on Great Smith Street, Westminster in early 1857, with a branch library in Trevor Square following soon after in June 1858. Yet, by December 1882, this was still the only instance in London in which the Acts had been adopted. This sorry state of affairs was lamented in an article in Trubner’s Literary Record (July 1866), reprinted in the Illustrated London Times (4 August 1866), which blamed a lack of local philanthropists willing to fund a library service:

London, which, of all other cities in the world, owes most of its position to the intelligence, education, and activity of its citizens, stands, to our thinking, degraded and disgraced for its apathy in this matter. Is there no public spirit among our bankers and merchants […] Is the accumulation of wealth alone the object of ambition to our citizens, and have they no desire to contribute aid towards the elevation and improvement of the masses?

While no London parish outside of Westminster adopted the Act in the first three decades after its passing, it was not simply ignored. The question was first raised in Camberwell in 1858. A newspaper article from 1932 quotes from a poster of the time proclaiming that a public library “would allay the prejudices of caste […] open to all comers; Rich and Poor would meet on an equality” and exhorted the population to resist “those small politicians, the niggardly do nothings […] lack-brains and know-nothings who miscall themselves your representatives who will try to divert you from your purpose of voting in favour of this gracious act!” Sadly, the required two-thirds majority did not agree with him. 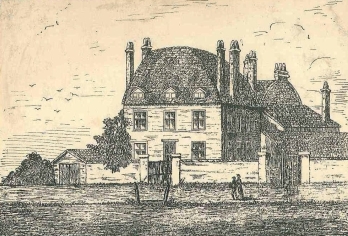 By 1866 the need for a two-thirds majority was abolished and replaced by a requirement for a simple majority. Still, this was not enough to pass the measure in Camberwell where, according to the South London Observer and Camberwell and Peckham Times, a meeting of the parishioners in the dining hall of the Workhouse “decided almost unanimously that the proposition was inexpedient”. This meeting is very unlikely to have included any of the poorest inhabitants of Camberwell. In order to vote at this time you had to be a man, aged 21 or over and also living in housing valued over £10 a year, which excluded six out of seven adult men. Those in property of a lower value were unlikely to be ratepayers and were not eligible to vote.

The main argument against free public libraries was financial, with many opposed to the increase in taxation.  The South London Observer and Camberwell and Peckham Times referred to it in November 1879 as “laying another straw upon the back of that marvellously-patient animal, the Camberwell ratepayer”. Some detractors, such as Mr. Merry in Kensington and Mr. West in Islington, whose views were reported in the Times, claimed this would be wasted money as such libraries would be used by the middle class—“those who could well afford a guinea a year for books”—rather than the intended beneficiaries, the working classes. Locally, the South London Observer wrote in November 1879 that Mr. Wesson of Camberwell caused “uproar” when he claimed that “working men could have plenty of books of their own if they didn’t handle the pewter pot so freely”. He was supported by Mr. Lond on the grounds that “he ought not to have to pay for another man’s enjoyment”.

Arguments for free public libraries stayed much the same over thirty years, at least in Camberwell where, in 1879, ratepayers voted once again against the adoption of the Acts with a majority of 627 (1306 against, 679 for), the resolution being defeated in every ward. The South London Observer celebrated:

And as modesty has ever been a characteristic of the South London Observer, we really don’t see why we should not have a crow for once on our own account […] We write fearlessly, and we don’t scruple to denounce this detestable state of things as a condition of positive parochial apostacy [sic], for what ought to have been a blessing, and was at the outset a very creditable notion […] has grown at Camberwell into a grim and gaunt Frankenstein before which even Shelley would have cowered, and whose one idea is to snap and devour the monies of the residents and rule them with the iron rod.

At the meeting where the result was announced, the crowd bayed for Dr. Rogers, chief proponent of the adoption, to explain himself. Feelings at the meeting were clearly strong and the South London Observer had a detailed report:

At last amidst the heat and row and squeeze, the Scottish champion got on the platform, but only to be hissed and groaned at as with no little fortitude he repeatedly bowed his acknowlegments [sic] à la favorite [sic] of the footlights. In vain he essayed to obtain a hearing. In vain Mr. Lassam grew crimson and Mr. Hunt nearly burst a blood vessel in yelling their hopes that the meeting would listen to the rev. gentleman. In vain Mr. Fermor, no longer the chairman, chirped his convictions that the ratepayers would not refuse to hear the originator of this movement […] Uproar drowned his [Dr Rogers’] voice, but his pantomimic gestures were supposed to be indicative of a plea for silence, but in the midst of the hubbub the gas suddenly turned off, and the meeting came to a very brisk end indeed, the cheering being renewed outside.

It would be another eight years before any Southwark parish adopted the Acts. We will explore this further in part two. 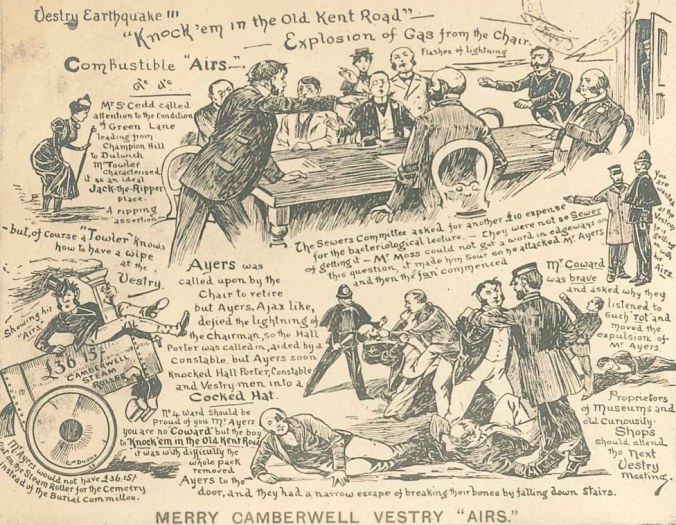 A satirical depiction of a typical Camberwell vestry meeting