Camberwell’s landscape is divided into two distinct parts: an area of high ground to the south including Denmark Hill and a flat plain extending to Walworth to the north. The higher ground is thought to have been the first area of settlement in Camberwell as it provided a strategic point for a Roman encampment. 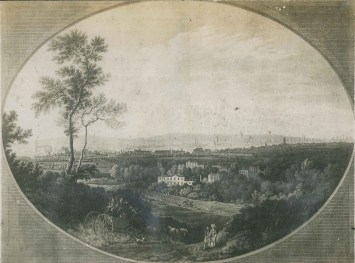 The view from Denmark Hill in the 18th century

By the 11th century Camberwell was one of the more important developments within the area we now know as the London Borough of Southwark. It is mentioned in the Domesday Book as being owned by Haimo, half-brother to William the Conqueror. It had land for ploughing and corn, 63 acres for cows, and woods that fed 60 pigs. Its importance is shown by the fact that it had a church, unlike the neighbouring hamlets of Dulwich and Peckham.

From Haimo the manor descended through his son Robert Fitz Haimon to Mabel, a ward of Henry I. Henry, on the basis that neighbouring Peckham was held by his son, Robert of Caen, married the two to consolidate royal influence in the area. In the process Robert was made the First Earl of Gloucester. Later the lands became the property of the Duke of Buckingham and control rested with that family until 1521, when the then Duke was executed for “treasonable thoughts.” After passing through various hands, it was purchased in 1583 by Sir Edmund Bowyer, whose descendants retained ownership of a considerable portion of the land until well into the 19th century. 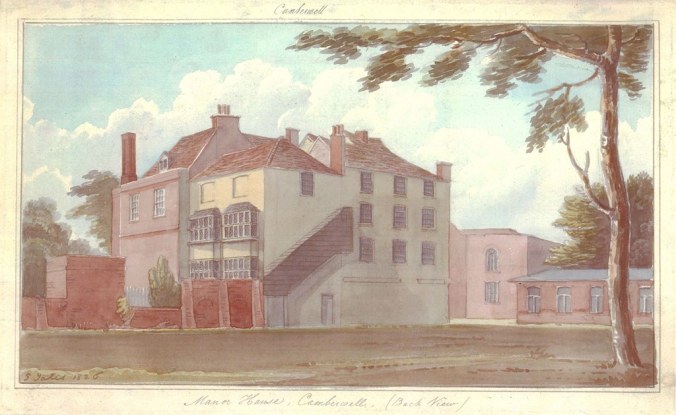 Until about 1800 Camberwell was a farming village surrounded by woods and fields.  The village was based around its High Street, now called Denmark Hill in honour of Prince George of Denmark, the husband of Queen Anne, who had a residence there. The village contained a traditional village green, which still exists, and it was here that Camberwell Fair was held. The earliest record of the fair is in 1279. It was abolished in 1855 as by this time it “attracted too many undesirables.”

The rural nature of the area in the 19th Century is revealed by the rewards available to residents who killed vermin. The produce grown locally went for sale at markets such as Covent Garden and hence animals could cause a real problem by eating the produce. Rewards of 4d per dead hedgehog, 1s per dead polecat and 4d per dozen sparrows were available. Records suggest that once the dead sparrows had been thrown out they were often collected up and presented again as freshly killed! 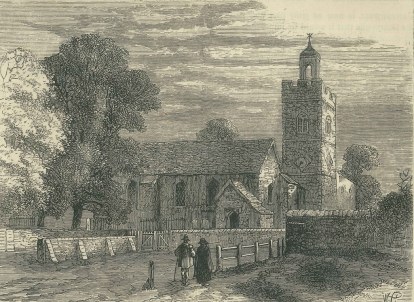 There were a number of mineral wells and springs in the area until about 1850. One of the village wells was reputed to have healing properties and from this legend comes a possible explanation for the name Camberwell. The old English word cam means “crooked,” so Camberwell may have meant “the well of the crooked,” suggesting that it was a place where people with physical injuries or impairments could seek a cure. It is perhaps significant that the local church is named in honour of St Giles, the patron saint of disabled people. 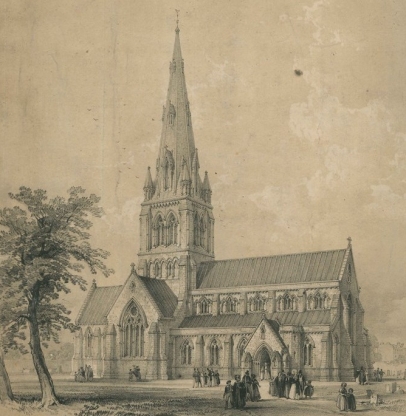 St Giles’s church still stands on its original site. The first church is estimated to have been built in the 7th century AD.  It was rebuilt in stone in 1154, and underwent many alterations over the centuries before it was destroyed by fire in 1841. The new church, finished in 1844, was designed by Sir George Gilbert Scott and contains stained glass windows designed by John Ruskin. 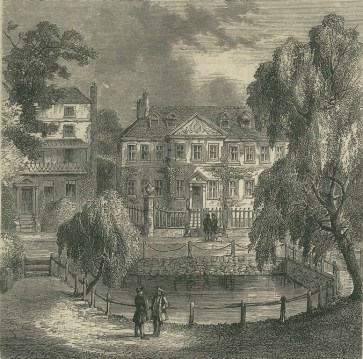 The 19th Century saw more affluent people moving into the area as the construction of Westminster Bridge (1750), Blackfriars Bridge (1769), Vauxhall Bridge (1816), and Southwark Bridge (1819), all made it easier for them to commute to work in Central London. Despite the population growth Camberwell was still an area of beauty. In 1842 the composer Felix Mendelssohn stayed with his wife’s relatives at Camberwell and was inspired to write “Camberwell Green”, now better known as “Spring Song”.

As with much of South London the coming of the trains led to a dramatic change in the landscape. The first trains arrived in 1862, and over the next six years a plethora of tracks were laid. The trains offered a new, cheap way to travel meaning more people could afford to live in the suburbs. In 1801 the population of Camberwell was 7,059, one hundred years later it was 259,425. During the building boom some slums were created and subsequently written about by philanthropist and social reformer Charles Booth in 1902. 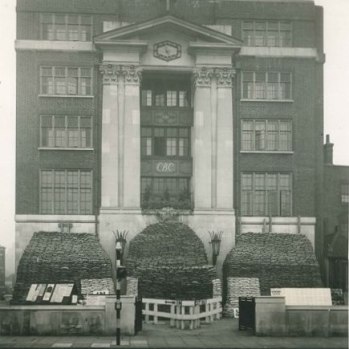 The Second World War hit Camberwell badly with 937 people killed and nearly all its buildings damaged, many beyond repair. Today much of the Georgian and Victorian architecture has been replaced or supplemented by large 20th century developments such as the Denmark Hill Estate and Dawson’s Heights.

Modern Camberwell is a highly residential area with a shopping centre and a thriving community. As you stand on Camberwell Green today, amidst all the modern hustle and bustle, it seems impossible that it was once a traditional village green in a small farming village.

We will continue our look at Southwark’s historic villages in future posts. Next up: Historic Walworth.