In Part 1 we met doctors George Scott Williamson and Innes Pearse and learnt about their ambitions to study the meaning of health. Now we’ll see how this led to the creation of one of Peckham’s most iconic listed buildings and what went on inside.

The first centre was a successful beginning to the Doctors’ research and attracted a good number of families but it was small. It therefore became necessary to find new premises in order to continue the health research and for families to continue to socialise and take part in activities. After 6 years of fundraising and planning, the new Pioneer Health Centre opened in May 1935 in St Mary’s Road, Peckham.

This new centre was bigger and better equipped and would enable around two thousand families to develop better health in a way that the old Peckham Health Centre could not cope with.

The design of the new building in Peckham was of particular importance to Dr Scott Williamson. He wanted a space that would provide the right kind of social environment for families to spend and enjoy their leisure time but also one in which he could observe those activities for the essential research into their health.  Hence, the appointment of an engineer – Sir Evan Owen Williams – rather than an architect to design the building. 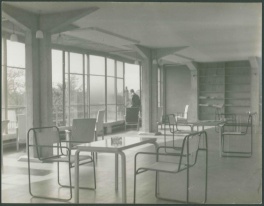 The centre was a modern building and praised nationally for its design. It provided easy movement and good visibility from area to area  enabling people to wander around, take part in activities, make contact with friends and family or enjoy watching others in their activities. There were no closed doors or corridors and glass replaced concrete for the main internal walls. It was an open building.

The building contained the second largest swimming pool in London, which could be seen from the cafeteria. It also had a gym, theatre, badminton court, two open spaces that could be used for different activities like dancing; committee rooms, a theatre, adult games rooms and children and baby play areas.

The Rules Of Membership

Within the centre, families were free to do what they liked.  The only time staff exercised authority would be in preventing someone else exercising it.  The Centre was a democratic space.  However, there were four rules to membership of the Pioneer Health Centre:

The centre was for families only – this could be a couple with children or without; this was because Williamson believed that the smallest family could be a couple living together in their home what he called  “the smallest biological whole”[1]. The family must live locally to the Centre. They must pay a weekly subscription to help maintain the health centre in its voluntary capacity and finally and most importantly, they must have a periodical health overhaul – this was both a physiological and biological one and could be at both the staff’s or the family’s request. There were also ad hoc consultations and check-ups, for example before conception, during puberty or menopause.  This was in order to deal with issues and problems as they were raised in a holistic way.

There were no other rules at the Pioneer Health Centre and a family would not be excluded so long as they adhered to them. The doctors felt that in order for the centre to run successfully, there needed to be a non-authoritative environment where open dialogue between families and the doctors was encouraged.  This last point was particularly important to the doctors in order to make all families feel welcomed and to gain their trust.

There were activities to suit just about every taste at the Centre.  As well as the usual indoor sporting and recreational activities, there was also evening dances and various outdoor activities that included vegetable growing and physical pursuits.

Every member of the ‘Centre’ had a Periodic Health Overhaul which involved laboratory tests, a complete bodily examination and a family consultation.

During the consultation, everyone was discussed individually, starting with the children first. All results were honestly shared and no advice was given unless the families requested it and no treatment offered. All questions were answered.

There was a holistic approach to the health of families at the Pioneer Health Centre.  As well as being examined during consultation, families were observed during their social and leisure activities in the centre. These observations were also shared with the families which gave parents vital information about their children which in turn helped them understand their children’s health.  These observations were also important for young couples wishing to have children; their health could be monitored before conception, during pregnancy and after childbirth.

There was a mutual flow of information between families and doctors about how they were developing. Once the families had all the information they wanted, they could use it as they needed, their health was their responsibility. If that meant deciding to undergo a necessary treatment, the Centre would be available to help find a hospital that was right for their circumstances and financial situation. Let’s bear in mind that the NHS had not yet been established.

In Part 3 we’ll look at the findings of the research, what happened to the centre during the Second World War and the arrival of the NHS.

[1] Peckham: The First Health Centre by G Scott Williamson, reprinted from The Lancet 16/3/46