I live aboard a boat built in the same year as the Imperial War Museum’s largest object; HMS Belfast. I offer this as an excuse as to why my conversations often meander into the subject of how the Second World War affected the lives of ordinary people. And so it was that in speaking with Southwark’s Harbour Master, Patrick Keating about current shortages and the stockpiling of items such as loo roll, that he suggested that I write something for this blog about rationing in the 1940s. I have decided to focus on a few lesser known aspects of how people coped with restrictions and shortages; and therefore loo roll seems a pretty good place to begin…

Ngaire’s boat being towed in for some maintenance

The story told by one Liverpool woman of a loo roll being offered as a prize during a whist competition, and the fact that the shortage of loo roll was debated in Parliament in 1944 suggests that then, as in the last few weeks, this vital article was an item rarely sighted on shopkeepers’ shelves. Paper in general was in short supply throughout the long years of the war, with orders to shops to reduce paper consumption to 30% of their pre-war usage, and employees in offices regaled by messages of ‘Don’t waste paper’. We often think that recycling is a modern invention but waste paper was pulped and then re-pulped throughout the war, although as it went through these cycles of usage it began to take on a khaki colour. Of course used paper could skip the pulping phase and be re-purposed directly for service in the lavatory; one former evacuee I know remembers being tasked with cutting up newspaper into squares for use as toilet paper. The bare shelves where once toilet paper was in abundance is a reality of our current situation, but even here there are wartime echoes. One lady in the Women’s Voluntary Services for Civil Defence devoted part of a letter home to her mother about her experience of actually finding loo roll in the shops:

‘May W. asked me to get some toilet paper if I could. I managed to get some thick stuff at a terrible price and commented on the price to the shopkeeper who agreed with me heartily and said it was an awful price, especially as it was only reconditioned.’

Meanwhile a woman in Croydon would let her neighbour know that the lesser-spotted rolls were on sale by calling out to her: ‘Boots have stationery in’. 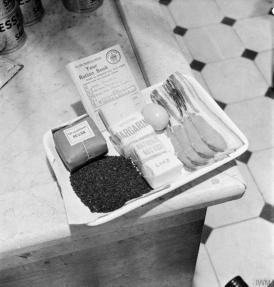 Keeping calm and making tea was, and remains a very good coping strategy, but with tea rationed at just 2oz per person per week, this had to be used sparingly at home and the government advised doing away with the habit of adding a ‘spoon for the pot’. Tea went on ration in July 1940, but sugar had been amongst the first items to be restricted when the national rationing scheme began in January of that year. For many the limit of 12oz per person per week was one way the war impacted on their lives every single day, and one 10 year old girl remembers her grandfather being firmly told off when he stole an extra teaspoon for his tea when he thought her mother’s back was turned.

For many a cup of tea is incomplete without an accompanying biscuit but many found their pre-war favourite for ‘dunk-ability’ was no longer available due to repurposing factories and labour, the pre-war 350 different types of biscuit were reduced to just 20! As today, with manufacturers switching production to make protective equipment and ventilators, in 1940 a series of laws were passed to ensure that raw materials, factory capacity and labour were diverted towards making munitions, and one of the seldom considered effect of this was the shortages of crockery and cutlery in the shops, which links back to our ‘tea-time theme’ because teaspoons became increasingly hard to come by as cutlery production was cut to just a quarter of the level it had been at in 1940.

Perhaps a good place to end would be the necessity, now as then, of good hand-washing, although fortunately we are not having to contend with soap rationing which was introduced to wartime Britain in February 1942 at an allowance of 3 oz per person, every 4 weeks. One housewife remembered how she stretched her family’s ration by placing the scraps into a tin with holes punched in the lid, and that this ‘when swished in a basin of hot water washed greasy plates, stockings or our hair’. If our current soap stocks on the marina ever run low I would prefer to follow her example than the advice offered in one women’s magazine, which in August 1942 printed an article that began: ‘It is very little known that any material, but particularly woollens, can be most successfully washed with glue dissolved in hot water.’ In these challenging times, and the need for children to be home schooled, this is one piece of 1940s advice I would urge you not to follow as a potential science experiment!

Join Ngaire aboard her little houseboat and learn some wartime recipes in Cakes Made From Carrots, one of the Adventures in History series from Imperial War Museums.