On 6 June – the 75th anniversary of D-Day, then-Prime Minister Theresa May and French President Emmanuel Macron inaugurated the site of the British Normandy Memorial at Ver-sur-Mer, overlooking Gold Beach. When it’s finished, it will join the Normandy American Cemetery and Memorial at Omaha Beach and the Canadian Juno Beach Centre as places of remembrance and learning about the Normandy Campaign of World War II, codenamed Operation Overlord. The British Normandy Memorial will include the names of the 22,442 men and women of all nationalities who died serving under British command during Overlord. As the memorial’s website suggests, one of those names stands out: Corporal Sidney Bates. He is the only service member on the memorial to receive the Victoria Cross, Britain’s highest award for gallantry.

In Southwark, though, we know him better as Basher. This is his story. 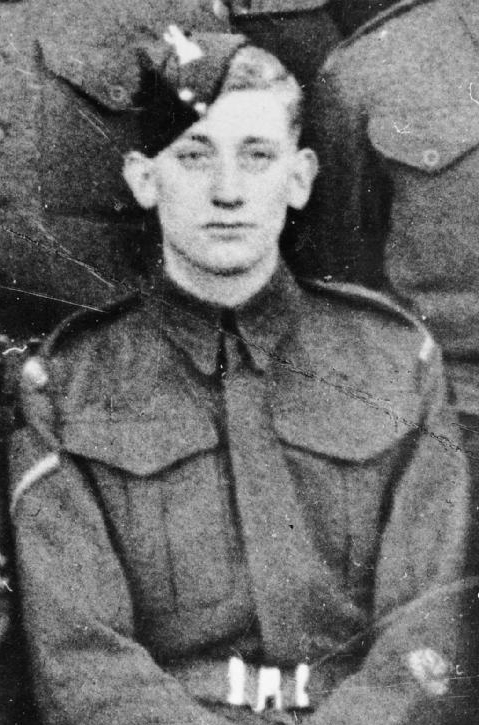 Sidney Bates was born on 14 June 1921, in Crown Street, Camberwell. He was the son of Gladys and Frederick Bates. Frederick worked as a rag-and-bone man, collecting materials like cloth, paper, bones, and metal for reuse and recycling. The family eventually included Sidney and his brothers Frederick, Alfred, and Albert and his sisters Gladys and Patricia; Sidney went to Camberwell Grove School, where he got the nickname “Basher” for his boxing skills. His family remember him as a quiet kid, unassuming but a merry prankster – and because of his quiet side, he usually got away with his pranks!

When he left school at 14, Basher went to work as a carpenter’s labourer. In June 1940, he joined the army, entering the 1st Battalion Royal Norfolk Regiment. Just before he shipped out, the family got together at the Sultan pub. He admitted his fear of what lay ahead to his mum before he left.

The 1st Royal Norfolks landed on Red Queen beach – the right flank of Sword Beach, near the city of Caen – at 7:25 AM on D-Day. They then fought their way through Normandy, the Low Countries, and Germany: a sphere of action known officially as the North West Europe campaign. General Montgomery, who commanded the 21st Army Group in which they served, claimed the unit was second to none. Sidney was no different, being promoted twice in the weeks after D-Day. On 13 July 1944 – the day before Bastille Day – he was promoted to lance-corporal, and two weeks later to acting corporal.

After breaking out of the D-Day beachheads, British units were fighting in the Norman bocage – a landscape of mixed pasture and woodland, where fields and narrow country lanes are sunken into the spaces between narrow ridges topped with high hedgerows which act as windbreaks for the livestock in the fields. It’s picturesque, and easy to defend – but incredibly hard to fight through.

On 6 August 1944, the 1st Norfolks were relieving the 3rd Monmouthshire Regiment near the village of Sourdeval. These units were holding a strategically critical salient on the Perrier Ridge – they were attacked in force by the 10th SS Panzer Division. Sidney was commanding a section (a group of 10 soldiers) at the right side of the left-forward company; he tried to move the section to avoid taking further casualties.

However, the Germans pushed deeper into the section’s position; eventually, Sidney’s section came under attack by 50 to 60 Germans armed with machine guns and mortars and supported by panzers.

A close friend of Sidney’s and the unit’s Bren gunner, “Tojo” Tomlin (nicknamed for his resemblance to the recently-ousted Japanese prime minister) died in his arms, hit in the face by machine-gun fire. That’s when Basher acted. He picked up Tojo’s Bren gun, got up, and advanced into the hail of bullets and mortars, firing from the hip. He was struck by machine gun fire and fell to the ground.

He got up, and continued advancing and firing.

He was hit, again, and got up again.

The third time, Sidney was hit by mortar shrapnel. This time, he couldn’t get up. Instead, he wrapped himself around his gun, firing at the enemy for as long as his strength held out.

But that was long enough. The Germans – perhaps shaken by Sidney’s determination – retreated to the sound of Sidney’s gunfire, leaving the position in the hands of the British. For his comrades, and many historians, his single-handed charge was the turning point of the battle.

Stretcher-bearer Ernie Seaman brought Sidney – badly wounded in the legs, stomach, and throat – from the field where he fell to a farmhouse nearby, which was being used as a forward field hospital. He died there two days later.

On 2 November 1944, Sidney’s Victoria Cross citation was gazetted: his parents collected the award in spring of 1945. They and Patricia (their only child left at home) had been bombed out of their home in Councillor Street, but refused to leave Camberwell. A public appeal for the family raised enough money to buy Frederick a new cart and pony, so he could keep working. He named the pony “Basher”.

Sidney has many memorials: the most obvious is his gravesite, plot XX 14E in Bayeux War Cemetary; his epitaph says that “[h]is parents proudly remember him as a true Camberwell Boy and a loving Son”. There’s also a monument to him in the field where he fell and a memorial bench on Camberwell Green. His nephew Chris is a stonemason, and laid many of these.

The memorial bench on Camberwell Green (courtesy of Bernhard Bauer)

Others are less obvious. His charge also featured on the front page of volume 157 of the comic The Victor, first published in 1967; it was reprinted twice before the comic folded in 1992. But perhaps the most poignant memorial to Sidney is a cottage in Norfolk named for him; it’s one of six built by the regiment’s memorial trust to house their retired – and honour their fallen – comrades.

Today, on the 75th anniversary of his charge to save his mates, we remember Sidney Bates VC proudly, and hope that you do too. The Sultan pub is gone now, but maybe lift a glass to Basher Bates, a true Camberwell boy, a loving son, and a good comrade, wherever you are.