By Wes White, Learning and Engagement Officer for Southwark Libraries and Heritage

On Tuesday 17 January we featured the first ‘Museum on the Move’ at Canada Water Library. Each month we’ll present a themed collection drawn from the Southwark Heritage collections. Original documents and artefacts from the Cuming Museum will be on display, freely available for visitors to see and swap thoughts about in the library, while artworks are shown on a big screen above. 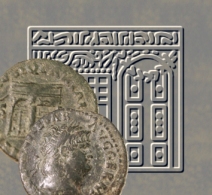 My theme for January was Janus – the Roman god of beginnings, doorways and the New Year; after whom January is named. He is famous as the god with two faces – one looking into the future, and the other on the back of his head peering into the past. Janus might not be an ‘A-lister’ in the Roman pantheon, being less well known than figures with planets named after them like Jupiter, Mars and Venus; but even so he was a significant figure in Roman mythology, and the Cuming collection actually features a number of objects directly related to him. These come in the form of coins bearing his likeness; and even one showing his temple, from the reign of Nero. The story of Janus’ temple tells that its gates stood open when Rome was at war, but closed in times of peace – and they were rarely closed. 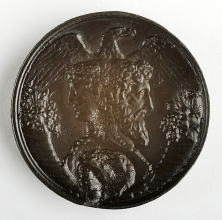 Also featured in the display were some press cuttings sourced from Southwark’s Local History Library and Archives about New Year celebrations in years past; particularly from the year 1900. I picked out that year to look at because of the significance of the turn of the century, only to find myself reminded by the Bishop of Rochester that technically the new century would have begun in 1901.

And considering that New Year’s Eve is famously such a busy time for the emergency services, I was also surprised to find a story called ‘Firemen at Play’ describing the Fire service’s own New Year’s Eve party – it finished up, predictably, with some of them having to get changed out of their party gear to tackle a fire…

Because Janus stood at the threshold of the New Year, he was also the god of all kinds of crossing-over points and doorways. This gave me the opportunity to feature some of the Cuming collection’s keys in the display. Those included a surprisingly small and humble key to Marshalsea Prison (which several visitors thought looked just a bit too easy for the pirates and smugglers the prison held to copy), and a far bigger, heavier, 13th century key to Bermondsey Abbey, which stood until the reign of Henry VIII. The Abbey is widely thought to be the reason that the area is known as ‘The Blue’ – as the colour represented sacredness.

By far the oldest thing on display this month was a fragment of an even older belief system than the Roman myth that Janus was a part of – a fragment of a false doorway from a tomb in Thebes. This and other Egyptian artefacts came to the Cuming collection via the explorer James Burton in the 1830s. So, why would there have been a false doorway in a tomb? It was false only to the living: this was the door that the departed spirit was supposed to step through, into the next world. 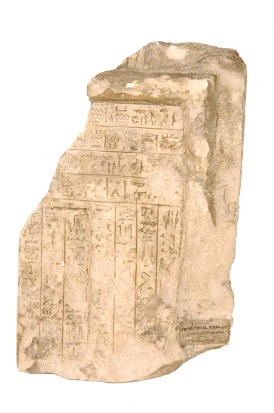 The next outing for the ‘Museum on the Move’ will be at Canada Water Library on Tuesday 14 February, 2pm to 4pm, and you might be able to guess the theme from the date! It’s Valentine’s Day – come and check out an exploration of romance down the ages.