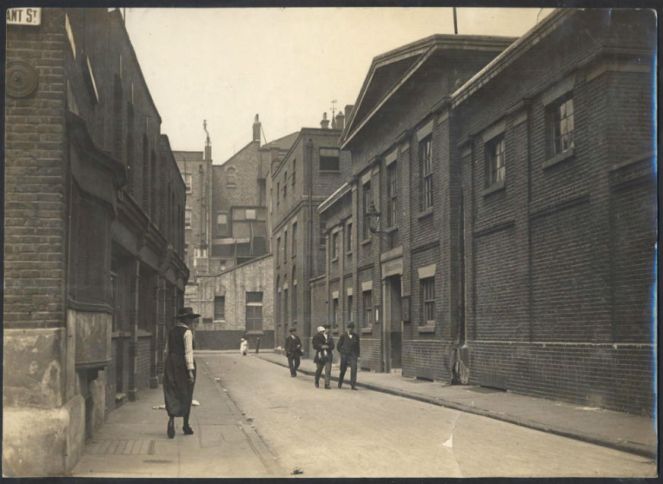 The workhouse in Mint Street dates back to 1729. The initial number of residents was relatively small, and conditions were recorded in ‘An Account of Several Workhouses’ in October 1731.

“There are now in it 68 Men, Women, and Children, of which all that are able, spin Mop-Yarn, and Yarn for Stockings, which are knit by the Women; and beside this Work, 25 Children are taught to read, and say their Catechism.” 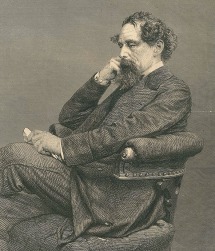 The St. Saviour’s Union Workhouse at Mint Street is thought to have provided Dickens with the model for the scene in Oliver Twist where the starving boy ‘asks for more’. When Dickens was young, lodging in nearby Lant Street, he passed Mint Street on his way to work. He would have seen the pauper children on their way to work in nearby workshops and factories. Dickens revisited the area as an adult, including Marshalsea Prison. His journalistic writings show he frequently went on fact finding missions to schools, hospitals, factories, workhouses and slums. It is very likely he would have visited the workhouse on Mint Street. 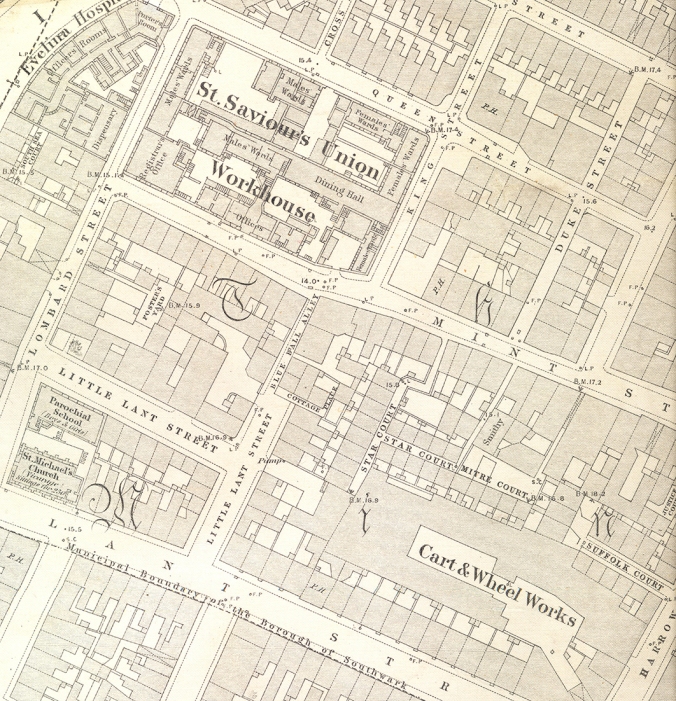 The Lancet investigated conditions in London workhouses and their infirmaries for a series of articles. Their description paints an abysmal picture of life in Mint Street Workhouse:

For the last three years and a half this house appears to have suffered from various epidemics, and especially from typhus. Many cases are admitted into the house from the neighbourhood; but many are developed in the house, and apparently in this way: The tramp ward for the women is a miserable room, foul and dirty, with imperfect light and ventilation, the floor being simply bedded with straw. Into this open sty the women are passed in, often with little or no clothing; and there, in considerable numbers, they pass the night. There being no watercloset attached, a large can or tub is placed in the room. This is the sole accommodation which the apartment possesses. The master informed us that there is no matron to look after the women, and that the place was really ‘a den of horrors’… We cannot doubt that, with such a history and so many surroundings, it is our duty to condemn this workhouse, which ought to be removed, and one built better adapted to fulfil its duties to the poor and sick of the neighbourhood.

They recorded the meagre food rations in Mint Street Workhouse as follows: 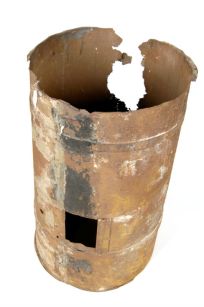 The pot, or ‘copper’ from the workhouse was donated to the Cuming Museum by the Workhouse Board of Guardians in 1921. It stood in the corner of the large stone hall at the workhouse and the broth or gruel was ladled out to hungry inmates. A circular brick wall around the base held in the fire, but was damaged when the museum was hit by a bomb during the Second World War.

Though the The Lancet articles caused an outcry which was a significant factor leading to the passing of the Metropolitan Poor Act in 1867, the Mint Street Workhouse itself remained in use until the 1920s.

Today, much of the former site is home to Mint Street Park, with just a small stretch of original workhouse wall remaining.

This month we will be looking into some of Dickens’ old haunts, and if you want to wrap up warm and step out onto the streets yourself, you can download our app (for iPhone or Android), and let the narrator take you on a journey that unveils Dickens’ Southwark. You can also use the Literary Map to see where Dickens’ books (and those of other authors) relate to the streets of Southwark.